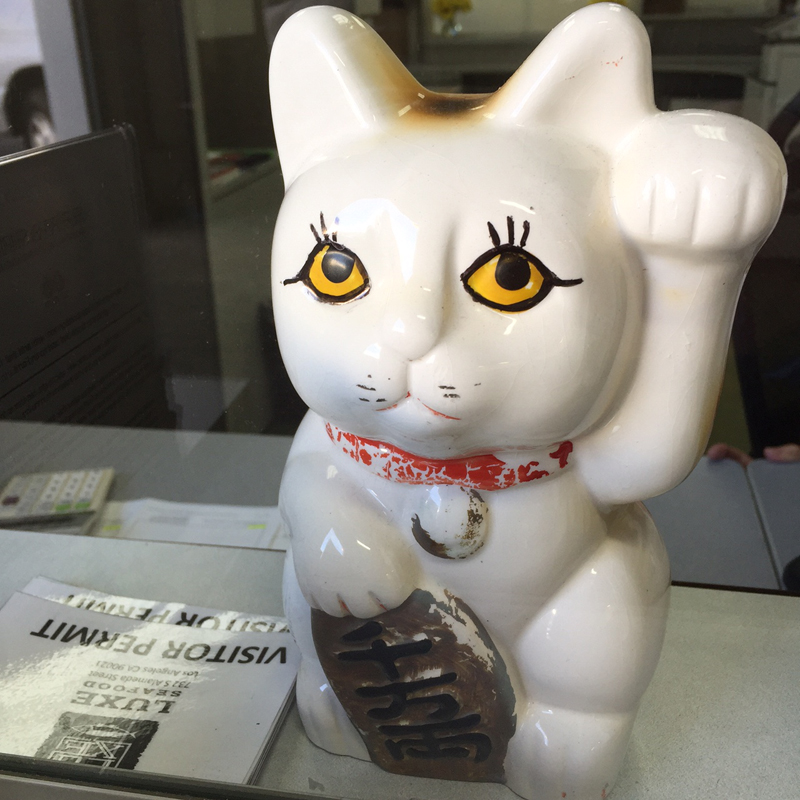 When you visit LUXE, you will see two beat up maneki neko by the front door and the cashier. Maneki neko, known as lucky cats, originate from Japan and supposedly bring luck to businesses. If the left hand is raised, the cat is beckoning customers. If the right hand is raised, it is trying to attract money. If I had a choice, I’d make mine wave for both.

These lucky cat figurines came from my mother’s sushi restaurant, Sushi Koharu, in Singapore. In 1984, there were less than ten sushi restaurants in Singapore and hers was one of them. By the time she sold the restaurant a decade later there were more than two hundred sushi joints, from the casual spot serving fish mounted machine-made rice clumps to the hotel backed high end establishments. Whenever a waitress called in sick I would be summoned to go work. No underage labor laws in Singapore! I got familiar with the Japanese menu quickly and started chomping on uni before it earned its roe-star status of today.

So what inspired my mother to open a Japanese sushi bar? Why take on an old school boy’s club? My mom loved Japanese food, there was a big Japanese expat community in Singapore and she saw a growing acceptance of raw food amongst local Singaporeans. Looking back, I do not think my mom ever thought her gender was an issue. Her plan was to hire Japanese sushi chefs, have them train local ones until the latter could take over. Really? She, a five foot woman, was going to oversee these Japanese samurai warriors clothed in chef jackets? And she was going to have them train local Singaporean chefs to revolt? But she did it. My mom did not spend time fretting about sexism or racism. She stomped on it. She had capital and she used it to her advantage. She lived in Tokyo, took advantage of my father’s Japanese contacts, learned how to buy fish at Tsujiki, set up the entire supply chain and lured third tiered Tokyo sushi chefs to Singapore. My mom did not have all the answers but she had magokoro (真心), a strong genuine core spirit. Just like how she planted those two lucky cats at the entrance of her sushi restaurant on the first day of business, I do so today at LUXE. Today I walk in her footsteps. I tell my LUXE colleagues that we do not know what lies ahead of us but one thing for certain is that we must have magokoro. Ganbatte!

PS: My lucky cats are not old. They are vintage!

Let’s create the most amazing seafoodie city in the world.

We aim to be a part of the most diverse, creative and vibrant culinary culture in L.A. From the funk of your umami to the sweetness of your hamachi, our specialty is sourcing your fishy aspirations.